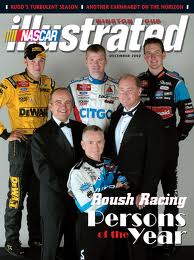 Kim Burton, May 27, 2001 (CD Number 36)
How she and Jeff met; early career; works as a teacher to support him; never sure if he would stay in the Cup series.

Larry Hicks, August 24, 2002 (CD Number 75)
Conversation with Hicks and Jack Roush. Hicks saved Roush's life when his plane crashed. The Hicks portion of the interview is at the end.