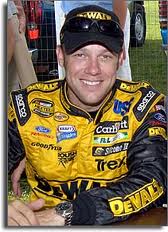 Matt Kenseth, December 8, 2000 (CD Number 11)
In New York at the Cup Series banquet. More into the racing side than the business side; recap of the year; it's all about winning; enjoys fans, especially kids; how to deal with bad results and pressure; wants to be a championship contender; dad's birthday; dad loves racing; met wife Katie at a wedding in Wisconsin; she's seven years younger, is "awesome."

Matt Kenseth, April 22, 2001 (CD Number 29)
At Talladega. Mark Martin's early interest in him; signing with Roush Racing; Robby Reiser; parents; favorite drivers growing up; season so far not as successful as expected; his motor home; public recognition when he goes out to eat (On same cd as April 22, 2001 interview with Kurt Busch).

Matt Kenseth, August 5, 2001 (CD Number 49)
At Indianpolis after the race. (On same tape with Jack Roush and Kurt Busch interviews).

Matt Kenseth, May 7, 2002 (CD Number 74)
By phone. In the chase for the championship; entire team is excited; Jack Roush accident; Roush just as sharp as ever; the one engine rule benefitting them in qualifying; has enjoyed the year's success after last year's disappointments; will spend some down time at cabin in Wisconsin.

Matt Kenseth, September 15, 2002 (CD Number 77)
Year has gone well, wants to do even better; still in championship race; would like to win a championship, but not obsessed by it; year's highlight was win at Rockingham; cabin he's building in Wicsonsin is nearing completion; always excited about racing; father has attended several races this year, both parents watch on tv; contract with Roush Racing; going to five teams could cause problems if there aren't additional people to do the work; not a party guy; not very forthcoming because he doesn't want personal information in a publication; not a long term planner, would like to stay in racing in some way after he quits driving; family is not exciting, no drinking, smoking, swearing; Jack Roush read book manuscript and was happy with it; Kenseth points our factual error in book. (On same cd as Jeff Burton interview.)