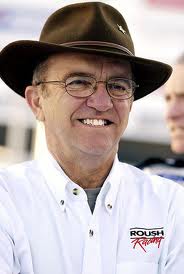 Jack Roush, February 18, 2001 (CD Numbers 13A, 13B, 13C)
At Daytona before and after the Daytona 500. Hopes for good finishes; needs to calm down Kurt Busch, who thinks he can win, calm Burton over replacement engine; politics means that highest in points gets the best engine; need to satisfy the manufacturer, sponsors and fansl Earnhardt death announcement. (On same CD as interviews with Jeff Burton, Kurt Busch).

Jack Roush, March 3, 2001 (CD Number 15)
Season starts on a low note; Kurt Busch learned at Daytona; Roush recruited by Ford; gets masters but unhappy at Ford and quits; a year at Chrysler; teaches at college; starts racing business; Fastbacks story; didn't get into NASCAR because it is regional and too far away from home and not cutting edge; wife and children.

Jack Roush, March 23, 2001 (CD Number 20)
At Bristol. Engine problems at Atlanta; Jeff Burton's broken valve spring; doesn't get caught up in the press, good or bad; fines and penalties; Roush ahead of the curve on safety; maybe revenge for the blowing raspberries nascar.com story.

Jack Roush, August 25, 2001 (CD Number 54)
At Bristol. Go-karting with son; Jack wants son to be an engineer like him but son wants music.

Jack Roush, March 29, 2002 (CD Number 71)
Health is good except for rotator cuff done last year; wants to get a package (team) together that has the right elements and completeness; there are conflicts between crew chiefs and the engineering department; crew chiefs think things should be operating differently, made a engineering department management change as a result; thinks the changes will result in improvements down the road; no engine failures this year during a race; Kurt Busch won last Sunday, was in Kurt's stall when he won; Kurt has changed the transmission ratio in order to get great restarts; Kurt has matured to the point where he was in contention and had enough tires and car left to win the race; nervous that critics would say it isn't fair because the Roush team is bigger than other teams; Kurt's first Cup series win; one of the great moments in Jack's racing life.