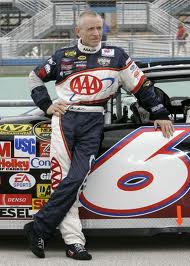 Mark Martin, March 14, 2001 (CD Number 16)
By phone. He heard of Jack Roush when he was a kid, Jack was so smart, now they are like blood brothers; the keys to his popularity include candor and being a straight-up guy; heis an alternative to drivers like Earnhardt and Gordon; doesn't set goals, racing is full of heartache; advises Kurt Busch; likes being a mentor to young people because it was so hard for him to get opportunities when he was young. (September 19, 2000 interview with Kurt Busch on same cd).

Mark Martin, May 9, 2001 (CD Number 31)
By phone. Screw is out of his knee; racing with broken knee, broken ankes, painkillers; shift to health and fitness began in early 1988; diet, workout regimen; stopping drinking; doing poorly is a growing experience; can't win with cars he has now; won't stayin the sport forever, wants a life including ability to attend funerals (nephew died); other drivers want to go as long as possible, but not him.

Mark Martin, June 10, 2001 (CD Number 42)
At Michigan. Hopes for the race; more women in NASCAR (as Shawna Robinson tries to make the race); danges of Talladega sell tickets and boost tv ratings; hates restrictor plate racing; won't do this forever because he is older and has missed too much; youth movement in NASCAR; racing with son Matt; his own racing is big business.

Mark Martin, August 25, 2001 (CD Number 53)
At Bristol. Son Matt's early quarter midget racing; New York City doesn't matter but contending every week does; same guy who won a lot but cars not right, could probably run better other places; expects to win again; Jack Roush empathizes; the joy of winning is everything right now; someday wants a life where he can find joy elsewhere; hates the Cup schedule but would like to race less intensively in the future.

Mark Martin, October 13, 2001 (CD Number 60)
(On the same cd as Kurt Busch interview). Press conference. Son Matt has been winning a lot of races this year; Mark says he (Mark) doesn't race for fun, expactations tend to take the fun away; has had great sponsors, owner, and people to work with over the years, and this has led to a lot of success and thus high expectation; feels blessed for his success; really good competition this year; first ingredient to success is commitment, great sponsor and great team are secondary; son Matt is theonly kid who races on the weekend with his dad being there--that is commitment; comments on performance in 2001; making more horsepower and better setups; likes a real loose race car that turns well; thinks the car is very competitive now; good team, no obvious reason for lack of a win this year; doesn't miss racing in the Busch series, can focus just on the Cup series; Cup racing has become very technical, driver has less influence on outcomes than five years ago; Kyle Busch is good enough to be racing full time in the truck seriesk but is still in school; long contract is a positive hting; loves winning, not just driving a car fast.

Mark Martin, October 30, 2001 (Cd Number 61)
By phone. Jimmy Fennig; HANS; big wreck at Talladega; the drivers' "revolt" of no interest to him; Bristol; Spencer piece; cars are faster but still not fast; tenth is an unrealistic goal at this point; scared at the huge tracks since September 11.

Mark Martin, April 17, 2002 (CD Number 73)
By phone; having better luck than last year, also faster cars and more horsepower; pleased, but still potential to grow; credits guys in the shop for building good cars; team is really good and fun to work with; ran a few tests; Kurt Busch an incredible driver and fine young man; proud of Matt Kenseth, especially since he (Mark) discovered him; requests for interviews this year about the same as always; Jeff Gordon, Dale Earnhardt Jr., and Kevin Harvick are the guys who are in demand for interviews.

Mark Martin, August 24, 2002 (CD Number 76)
At Bristol. Thoughts about this year; having fun. 2002 is better than 2001; good and bad things that go with everything; last year less pressure, this year in the championship race, so more pressure; when he is going to sleet, all he can think about is if the car is set up correctly; happy with Charlotte win; family was there, which was very special; got a real high from the win; if he can run top five every week and not self-destruct, he can win the championship; a championship now would be great because he can see the end of his career getting closer.

Mark Martin, December 17, 2002 (CD Number 78)
Staying home for Christmas this year; reflects back on the year; a very good year, much better than 2001; optimistic about 2003; had moments of doubt in 2001, but 2002 gave new life to his career; still has a chance to win a championship, but it is not as important to him as it is to others; Junior Johnson never won a championship; when he heard about Jack Roush's accident he went straight to the hospital, arrived before Jack did; he was in denial and wasn't convinced that it was actually Jack.