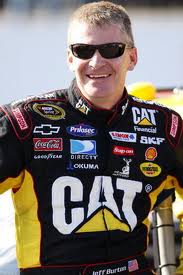 Jeff Burton, March 3, 2001 (CD Number 14)
In Las Vegas. Recap of Daytona; the Earnhardt encounter at Daytona; effect of Earnhardt's death made it harder to concentrate; his parents. (On same cd as March 2 Kurt Busch interview).

Jeff Burton, March 15, 2001 (CD Number 17)
By phone, after Atlanta and just before Darlington. Atlanta was a disappontment. Las Vegas wreck still a mystery to him, takes responsiblity, apologized to Jack Roush; Jack views wrecks as learning experiences; Jack worries wrecks will make Jeff less aggressive but Jeff drives more conservatively to get enough points for provisional start if needed; Andy Griffith reruns; terrible season so far, decides he can't buy his dream boat; doesn't want competitiors to laugh at him; a testing time to find out what people are made of; crew; changing diapers is good medicine; hopes no one gives up; thoughts about Darlington.

Jeff Burton, March 23, 2001 (CD Number 19)
At Bristol. Penalty for rolled tire at Darlington; fear that he might go home today; started drivng motorized vehicles early; childhood memories; father liked going fast; early go-kart racing with brother Ward; thought he would make a living building race cars, not driving them; competitive but not cutthroat; love to be a basketball coach; risk and possibility of dying; racing not the most important thing in life; won't be driving at age 40; future with Roush Racing; loves being a public figure; brother Ward is an environmentalists first, driver second; won't feel cheated if he wins the championship; still have a shot at 2001 title; changed the way people think about bad qualifiers.

Jeff Burton, March 24, 2001 (CD Number 21)
In the media center at Bristol. Safety; Daytona: Talladega; low in points standing; still hoping to make a run at the championship. (On the same cd with Kurt Busch March 24, 2001 interview).

Jeff Burton, April 11, 2001 (CD Numbesr 26, 27)
By phone. Feels "normal" to have placed third; doesn't like inaccurate reporting but answers questions about what went wrong; thinks a good end of season awaits him; Talladega is a track problem that NASCAR won't change because it would cost NASCAR money; NASCAR willing to walk fine line of safety; wants to be a senator; Duke Children's Hospital involves him and wife Kim; won't talk about safety at tracks anymore because it gets him "off kilter;" grew up watching Earnhardt, didn't root for him but respected him; Earnhardt could be dirty, they only tangled once; Dale spoke his mind; morning of 2001 Daytona 500 talked to Dale about boats; finding out Earnhardt was dead, safety issue;thinks his car is safe; NASCAR didn't spend any money researching Adam Petty crash; Jack Roush wants him to be quieter, but they have talked about confrontation with NASCAR over safety issues if needed. (Interview with Dale Earnhardt Jr. is also on CD #27).

Jeff Burton, April 21-22, 2001 (CD Number 28)
Press conference at Talladega. Race will be exciting, what to watch; race strategy; his schedule on race day; fans like excitement of racing on superspeedways, drivers don't because one mistake can take out 20 cars; needs to be both exciting and safe; comparison with brother Ward Burton; difficult year; chances of winning; Dodge looks to be best car for Talladega; favorite track; effect of tv on racing; NASCAR does a good job of overseeing the sport; family travels with him every weekend. (On same cd as April 21-22, 2001 interview with Kurt Busch).

Jeff Burton, May 9, 2001 (CD Number 30)
By phone. The zen of his problems in 2001; Jack is supportive, team morale is ok; he is behind NASCAR now on safety after drivers and media criticized it.

Jeff Burton, April 10, 2002 (CD Number 72)
By telephone. Update on book publication; Roush Racing performance in 2002; teams all doing better except for Burton and 99 car; need to be more attentive to car needs, such as more speed; analyzing data and talking to other Roush teams to improve; health issues of team member.