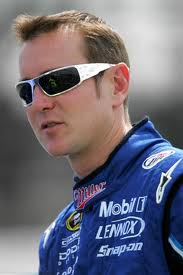 Kurt Busch, August 7, 2000 (CD Number 5)
By phone. Just had a birthday, is at the gym about to work out. At midseason he has 2 wins and 9 top fives, has exceeded his goals; is pleasantly surprised, but still has room for improvement; wants to learn more about shocks and to drive more like a professional on the track; talks to Jack roush on race weekends and around the shop; good interactions, more like a buddy relationship than a boss-employee relationship; gives him confidence; talks about merchandise he has for sale online; a little upset that there are not more items available; doesn't get mobbed for autographs yet, but next year driving will be the easy part, lack of privacy will be the hard part; will be spending a lot of time talking with people, signing autographs, being a spokesman for John Deere; going to be a race commentator in a few weeks at the Las Vegas track where he grew up racing; if things work out with John Deere there won't be an off season, as he will be testing; does three  one-hour workouts a week, plus two hours with a trainer, a total of about five hours a week; keeps a journal about the tracks he goes to.

Kurt Busch, September 19, 2000 (CD Number 16)
On same cd as March 14, 2001 Mark Martin interview. By phone. The eve of his first Winston Cup start; still doesn't know who his crew chief is going to be; John Deere sponsorship came as a surprise; there is a good possiblity that they would not be back for next season, they are cutting expenses because their stock is not performing, had to cut $150 million from their operations; it is all internal to Deere, has nothing to do with Kurt; Jack Roush told him this might happen; still wants to go forward and race out of the same shop next season; tries to make the jobs of everyone else easier and have a lot of good people around him; Roush was impressed that he walks the track before every race; learned this early on when he raced on dirt tracks; it is valuable because the tracks are all new to him; Dover will be his first Winston Cup start; thinks it might be too early, but he has felt that way throughout his racing career whenever he went to the next series; doesn't want to let anyone down, understands the gamble Roush is taking; he feels a lot of pressure; is packing up his apartment and moving; enjoys being the spokesperson of the race team; wants to qualify well; his mom will be at Dover with some friends and Kurt's girlfriend; his dad will be at home with his brother Kyle, who is racing.

Kurt Busch, January 15, 2001 (CD Number 12)
In Charlotte. Daytona 2000 wrecks, in truck race starts 34th and finishes 2d; more good runs then a bad spell; Mike Wallace and he hate each other; details of the season and frustrtion building as he comes close but can't quite win; "the great crash" description; played Lttle League and was good but stopped when daddy bought him a car as a freshman in high school.

Kurt Busch, March 24, 2001 (CD Number 21)
In his hauler at Bristol. Frustrated: no crew chief, bogged down, used to mastering every stage but not this; safety bel issue;green flag starts; first Cup race at Dover; Darlington; Kevin Harvick; angry, takes it out on family and friends; glad to have a sp;onsor but not happy that he has not say in color of car and uniform; feels so young when talking to Jeff Burton and Mark Martin. (Jeff Burton March 24, 2001 interview on same cd).

Kurt Busch, April 5, 2001 (CD Number 25)
By phone, he is on his cell driving to Martinsville. Bristol the lowest point of his career; car and crew chief changes making things better; happy with sponsorship.

Kurt Busch, May 26, 2001 (CD Number 33)
At Charlotte. How he got the attention of Roush Racing; Gong Show audition; talk with girlfriend Melissa on career advancement after offer from Roush; fall-back plans; crew member Jessie Walker comes with him to Roush; Geoff Bodine crash at Daytona. (On same cd as Mary 26, 2001 interview with Arlene Martin).

Kurt Busch, August 5, 2001
At Indianpolis after the race. (On same cd with Jack Roush, Matt Kenseth).

Kurt Busch, August 25, 2001 (CD Number 52)
At Bristol. Engine failure at Michigan; Indy recap of engine woes and Jack Roush is mad; Kurt is the only now getting engines from NC; has done poorly at Michigan, some problem at Roush Racing; hates seeing Harvick run away with it; failing at the quick adaptability he is known for; looking to 2002 at this point; "its a very humbling sport."

Kurt Busch, March 28, 2002 (CD Number 70)
By phone. Going on a media tour; won race at ristol the day before, his first Cup win; worked hard to make it happen, as did folks around him; activities after the race win; critical of Kevin Harvick; surprised that his first win was at Bristol, thought it would be Darlington; appreciates Jack Roush's confidence in him and his ownership style; happy and excited.